In case you hadn’t heard – we’re moving the contest to August starting this year. Mid-year 2018 the timing of the contest as it related to IML came up. After much discussion, meetings, and proposals, it was decided that whoever won Mr. SF Leather 2019 would have the option of competing right away (May 2019) or wait until after their step down and compete May 2020. As you may know, Jawn competed this last May (1st Runner Up!). Therefore, the contest has moved to August (3rd weekend) 2019 for the 2020 titleholder year.

Why was it moved?

The contest has periodically moved over the years. The main impetus for this move was to give the current Mr. SF Leather more time to be in his title year and prep for IML during the 8 months.

Some additional side benefits:

After reviewing the calendar for competing events, the third weekend of August seemed to have the least amount of conflicting events.

This August’s contest will be just the Mr. SF Leather and SF Bootblack contests. There will be no usual weekend activities. The awards will continue to be held in the beginning of the year – watch for more information on that as things are planned!

As usual, anyone can submit an application to be a contestant that meets the qualifications. All the contestants that ran in March 2019 are eligible to run again – they are not only still in their feeder title year, but eligible (as they were before). The Mr. SF Leather contest will continue to be limited to 7 contestants. The SF Bootblack contest will be limited to 3 contestants.

We’ll start the contest off with the Meet and Greet at Mr. S on Friday night, then move over to the SF Eagle to do the fantasy grab bag portion. Saturday will be the interviews and the contest. The evening portion will contain the speeches and pop questions. And then stick around for dancing and social time after the event before you join any victory parties that may happen that night. Sunday we’ll celebrate our new titleholders! More information on how and when as plans come together.

We hope you join us this year August 16th – 18th to help celebrate Jawn and Allison’s title year (too short, we know!) and get to know another class of contestants!

Questions? Want to get involved? Comments? Email mrsfproducer@leatheralliance.org any time.

Jawn, First Runner Up At IML!

Current Mr SF Leather Jawn Marques, took home first runner up out of 68 contestants this year at IML. The 41st IML title ended up going to Jawn’s Bare Chest Calendar brother Jack Thompson. Jawn delivered a passionate speech about losing his husband TJ to suicide in the summer of 2018. This message reached many people on the IML stage. Jawn easily made top 20 this year giving him the opportunity to deliver his speech.

Also of note: Amp Somers who was 1st runner up at Mr SF Leather in 2019 also placed in the top twenty at IML. He placed 5th place in the competition overall. It was a great year for San Francisco at the IML contest this year.

Current San Francisco Bootblack, Victoria judged the 2019 Mr Powerhouse Leather contest held in January at the Powerhouse bar in San Francisco. Victoria became the first woman to judge that contest in the 22 year history of that title.

As Victoria’s year draws to a close, we want to take a moment to just honor what a year it’s been for her as the first San Francisco Bootblack. She has taken the stole to both International Ms Leather and Bootblack contests in San Jose as well as to the International Mr Leather and Bootblack contests in Chicago. We are so proud of Victoria and all the work she has done this year.

The San Francisco Leather Alliance Weekend is set for 2019 and once again the San Francisco Bootblack contest will be a part of the festivities. The dates have been set for March 1-3, 2019 in San Francisco, CA at the beautiful SOMA Arts venue.

We will welcome Victoria, the first San Francisco Bootblack back to our stage to stepdown on Saturday night, and we will see who will carry on the stole for the second year of the SF Bootblack Title. Victoria has had a wonderful year. She has not only been out in our local community, but has been seen at events on both the west coast and the midwest. The SF Bootblack stole made it out to IML in it’s first year. We are very proud of the work she has done to raise visibility for this title in its first year. 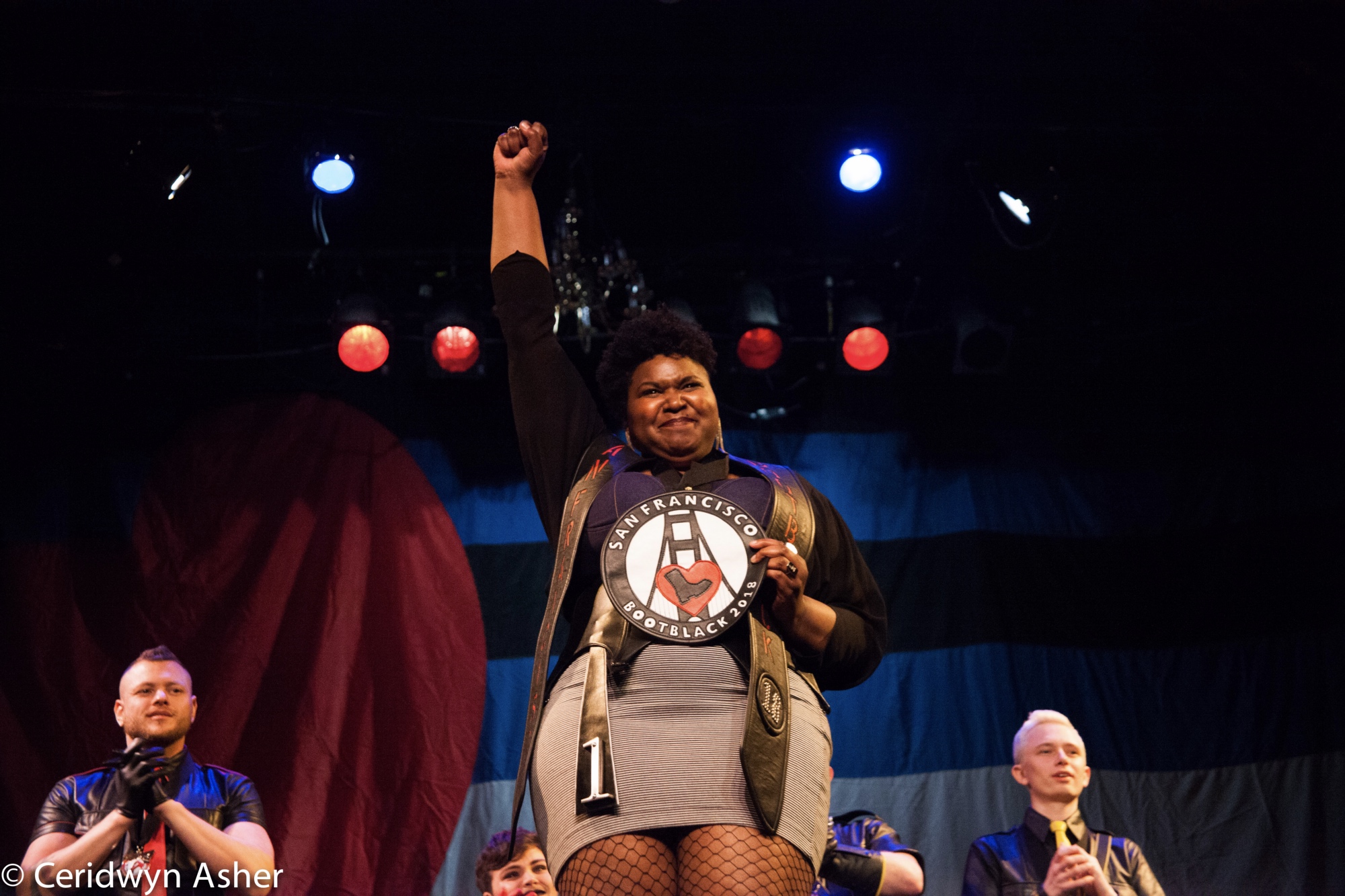 RealTalk. it is not easy to be a leather titleholder and be poor.

i have shit to say that folks need to hear, my presence alone challenges conventions and creates conversation, and my visibility can encourage other folks to take up the space they deserve. so i will continue to show up, i will keep investing in this process because i believe that what i am doing is important. also, it’s pretty fucking fun.

but when i was running for SFBB, the sense of dread i felt about what the FUCK i was gonna wear and how many outfits i needed and how i could get my hands on some more leather before the contest was ever-present. and after i won, when folks jested about how i had to “get some leathers,” and when i got feedback about how as a bootblack, i should probably wear more boots, i felt discouraged and unwelcome. seriously? like, are you buying?

i knew that i deserved my title because i showed the best of myself and earned that shit! yet and still, to some, none of that was enough to make up for the fact that the looks i was turning weren’t what the people wanted to see.

as i look ahead to the rest of my year, i think about the sacrifices i will make in order to show up to the places where my presence is most impactful (either for myself or for others). i think about the careful calculations: (how many volunteer hours & bootblacking shifts i can fit in )➕ (how much my back/body is actually up for) ✖️ (actually having the time/energy to still represent myself and my title) and my head hurts.

and when i look forward and think about what’s next for me, and consider that thing that happens in April, i begin to feel those familiar waves of dread again.

the fuck would i wear? what do i already have that can be augmented will smaller leather pieces that are maybe accessible to me? can my substance, skills, and personality once again shine bright enough to make up for the fact that i will likely never be able to afford head-to-toe formals? (and honestly, even if i did have the money for them, i’d more than likely still spend it on something else like getting out of debt or just give it to my parents who have supported me through this new poverty adventure.) not to mention all the new questions/worries that would come up if i won!

a person’s wealth is not an indicator of the content of their heart, their sense of integrity, the drive they have to create a world where we can all flourish, or their ability to speak passionately about this community that binds us; and those are the things that i believe a title holder should have.

and then there’s the guilt. well maybe if the title system is so difficult for me to participate in, i just shouldn’t do it right? or at least wait until things are more comfortable? (HA)

but… fuck that noise right?

a person’s wealth is not an indicator of the content of their heart, their sense of integrity, the drive they have to create a world where we can all flourish, or their ability to speak passionately about this community that binds us; and those are the things that i believe a title holder should have.

so why do we tie these substantive traits to someone’s possession of the resources to present themselves in “the right way” and show up & out at all the things?

some of us are poor. some of us didn’t grow up in a setting where we could establish relationships with mentor-types who might gift us leathers or allow us to earn them. some of us have families who we are committed to (be those commitments financial, emotional, or investments of time) regardless of their level of acceptance/understanding of our “lifestyle.” some of us have careers that we are dedicated to (idealistically, financially, both or neither) that we cannot/will not put on hold simply because there is other work we want to do too.

Run for a title however works for you.

if so many of us occupy one or more of these boats, but ALSO still have what it takes to represent our community, maybe we should be thinking about how to bridge this gap? (hint: we should)

run for a title however works for you.

and to the folks who hold the keys to the title system: the onus shouldn’t be on us (the disenfranchised) to make the system work for us. the system should change to be more accessible to the community it serves. -visibly prioritize the aspects of your title that you are passionate about. -tell your judges what key-traits you want your titleholders to have. -make the travel requirements for your title known to all and not just the folks who sign the contract so your titleholders don’t get accused of being lazy when they’re not at every single event.

the title system can be an amazing and beautiful tool for creating change and goodness in this community of ours, but only if it’s accessible to EVERYONE in the community. we can do better.